Seeking Solace Underwater - A Short History of the Submarine 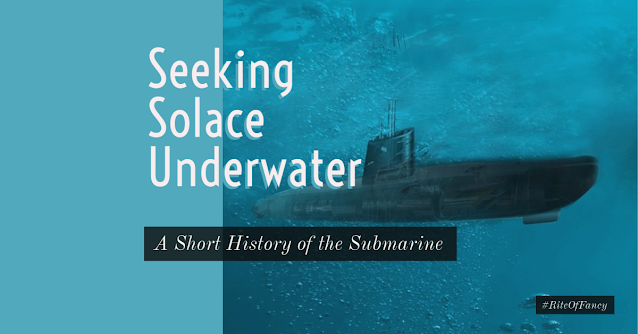 It isn't a secret that I am a total Jules Verne fan and have been completely enamored by his books.  My favorite, of course, is 20,000 Leagues Under the Sea.

The idea of a submarine has been "floated" since the late 1500s, with the first documented submarine being built in 1620 by Cornelis Drebbel and used oars for propulsion. The first military submarine (also human-powered), was called the Turtle and was built in 1775. It wouldn't be until the late 1800s that a submarine would operate with any type of fuel-driven engine.

Because of these propulsion difficulties, it took until the early 1900s (and the widespread use of the diesel/electric engine) before navies began regularly using submarines, although, once the technology was developed the submarines quickly gained notoriety during WWI with the German U-Boats and by WWII, submarines were considered to be a standard complement of any modern navy.

Prior to the advent of nuclear power, submarines relied largely on diesel fuel.  Because of this, submarines couldn't remain submerged for very long, otherwise, everyone would run out of oxygen.  Long-distance missions, like those found in 20,000 Leagues Under the Sea, were out of reach.   It wasn't until the development of atomic engineering that a non-oxygen based propulsion system was a technological possibility and it would take until 1951 before a nuclear propulsion system was engineered to power the first nuclear submarine.

In 1954, the USS Nautilus was christened by Mamie Eisenhower and on its way into history. Later, in response to the Cold War threat of the Sputnik launch, the USS Nautilus would submerge under the ice of the Arctic Ocean and became the first vessel to reach the geographic North Pole underwater on August 3, 1958.

The USS Nautilus remained in service for almost 25 years, until her last voyage on April 9, 1979.  She was decommissioned on March 3, 1980.  She rests as a museum now at the Naval Submarine Base in New London Connecticut. and her two forward compartments are open for tours.