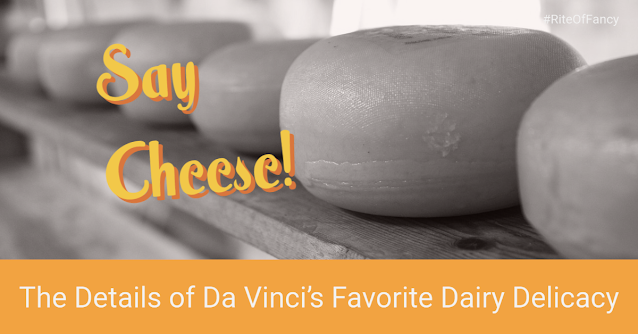 Did you know that Leonardo da Vinci had a favorite cheese?

Today, after falling into a rabbit hole of cheese making, I learned about the wonderful, Italian cheese called Montebore.

Montebore is a cheese made in the Northern mountain provinces of Italy and first appeared in written documents around 1300.  During the heyday of its popularity, it was widely-produced, although now, there are only a few cheesemakers left.

Montebore is a fresh cheese and is made predominately with full-fat sheep's milk (the ratio is about 70/30 to cows milk) and it is arranged in a salted wedding cake shape.  It is only aged about 20 to 30 days.

It turns out, da Vinci was quite the nutritionist and his diet of mostly vegetables, cheeses, and grains would impress any modern dietitian. He would recommend his diet of well-chosen, well-cooked, and simple meals to others.

After reading about his eating habits and food choices, I am now on the lookout for the one cookbook that was found in da Vinci's library after his death - Bartolomeo Platina's "On Right Pleasure and Good Health" which was first published in 1470 and is largely considered the first cookbook.

It is out of print.