Huh?!? How, Exactly, Did a Modernist Painter of Nudes Get an Extinct Indonesian Lizard Named After Him? 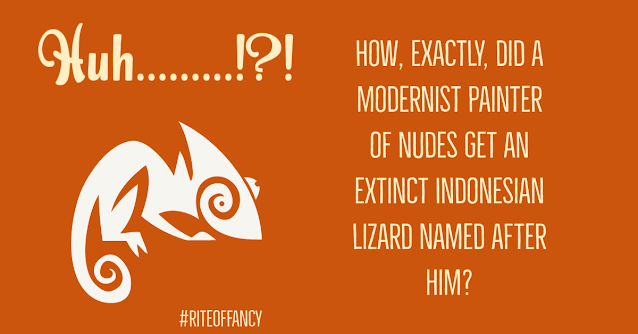 There was the most amazing story the other day about the rediscovery of a lizard thought to be extinct.

During a 2018 bird survey around Lake Toba in North Sumatra, Indonesian researcher Chairunas Adha Putra discovered a dead lizard that he hadn't ever seen before and called in expert Thasun Amarasinghe, who, stunned, immediately sent the sample to Jakarta.

It turns out the lizard was a Modigliani Lizard, and, until now, there was only one other specimen that existed and it was in a museum in Genoa Italy, where it had been for 130 years. There were, of course, sculptor representations of the lizard in Indonesia.  The lizard existed in Batak mythology and there were wooden figurines of the lizard, but outside of the specimen in Genoa, no other real-life example of the lizard existed. Until 2018.

Mr. Putra returned to Lake Toba and discovered a living population of the lizard. Learning about a thriving population was such a moment of hope for me. We hear so much about the Earth's destruction and as Elizabeth Kolbert's book The Sixth Extinction (review here) tells us, we are losing species all of the time.  It was wonderful to learn about the survival of one long thought lost.

Still, at the end of it all, I couldn't figure out how the Jewish Italian sculptor and painter Amedeo Modigliani had gotten a lizard named after him.  Modigliani spent most of his life in Paris, he also had tuberculosis and was known for his self-indulgences.  I couldn't imagine him in Sumatra. Plus the dates and the geography seemed off.  Modigliani was born in Livorno in 1884 but the Modigliani lizard sample arrived in Genoa in 1880, four years earlier and 100 miles away from his place of birth.

At first, I wondered if it wasn't a 19th-century eco-publicity campaign, much like Hugh Hefner's naming of the Sylvilagus palustris hefneri, but then I realized that the lizard couldn't possibly be named after "Modigliani, the Artist".

Elio Modigliani (1860-1932) was an Italian naturalist of the Risorgimento period when the city-states began their unification and scientific/political/humanist thought was in the foreground of everyone's mind.  The Industrial Revolution was ongoing and new discoveries were being encouraged.

Elio Modigliani filled the shoes of up and coming Naturalist well.  When he was barely 20 he discovered study-worthy Neolithic remains near Genoa.  Most of his work was done in Indonesia. Between 1886 and 1894, he explored Sumatra and Enggano Islands, bringing back many samples to the Genoa Museum. It was said, that despite his encounters with hostile native Sumatran tribes, he never fired his weapon once and always managed to get out of any troubling situation by talking.

Bravo to Mr. Modigliani for the initial discovery and bravo to Chairunas Adha Putra for the lizard's rediscovery.