All My Flowers: My Fuschia is so Bright. 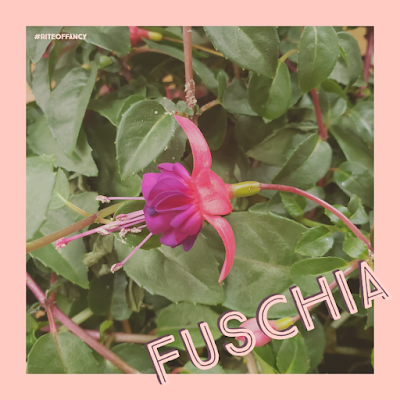 The other day, while wandering through the garden center at Lowes, I discovered the most ornate and delightsome flowering plants and discovered that they were called fuschia.

I always thought fuschia was the hot pink of the 1980s.

Anyway, I fell in love and immediately wanted one (or two) but the plant was marked as an annual and I am still working on establishing the bones of my garden with perennial plants.  So I didn't buy them that day. I regretted the decision immediately.

I begin to look into the plant and discovered that fuschia isn't an annual plant at all, but rather a tropical shrub and one that can be overwintered.

Fuschia was discovered by the French monk and botanist Charles Plumier on the island of Hispaniola (Haiti and the Dominican Republic) around 1696/1697.  Charles Plumier named the plant after Leonhart Fuchs, the German botanist who wrote De Historia Stirpium Commentarii Insignis (Notable Commentary on the History of Plants), which was a book published in 1542 and contained more than 500 woodcuts of individual plants and their properties. The book is still respected in botany circles.

While many are tropical, there are a few cultivars that are cold hardy and can grow quite far North.  In fact, there are quite a few that have managed to make their way to Ireland, Scotland, and the Pacific Northwest, where they will die back during the fall and re-emerge every Spring.

Of course, once I learned these were not annuals, I immediately went back to Lowes, where I bought two.

Fish rolled his eyes when he saw them.

I realized after I bought them why I hadn't seen them before. Growing up in the high deserts and plains of Utah and Colorado, water had always been a very scarce resource and fuschia is a very thirsty plant. Potted, it has required almost daily waterings.

Fortunately, my plants seem to like the humidity in Arkansas, although this cultivar won't survive the winters here unprotected.

I always love getting new plants and trying to find places for them.  So far, these have been a great addition to the sunny front porch and I hope to overwinter them in the sunroom.

I am also on the look-out for hardy fuschia, because I can think of several places in my garden that this could grow.