Musing About Michelangelo - What Makes a Saint? 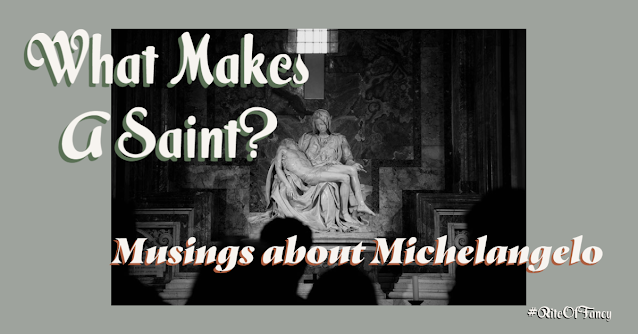 Dear Henry,
Several months ago, I took a road trip to the Precious Moments Chapel and fell in love with the work of Samuel J. Butcher.  Although their works couldn't be more different, Samuel J. Butcher was inspired by  Michelangelo's Sistine Chapel.  Michelangelo has been the inspiration for many artists throughout the ages and almost everyone can think of something he has made.
Michelangelo was born Michelangelo di Lodovico Buonarroti Simoni on March 6, 1475, in Caprese Tuscany.  After the death of his mother, Michelangelo lived with his nanny and her stonecutter husband, until he apprenticed with the artist Ghirlandaio when he was thirteen.  He would gain the attention of the Medici family within a year. Michelangelo was a prolific artist and scholar and would continue to produce art, most of it religious until his death on February 18,1564, at the age of 88.
The statue of David and the ceiling of the Sistine Chapel (the inspiration for Samuel J. Butcher's Chapel) are the most commonly remembered of Michelangelo's works, but it was the Pieta that has always inspired and moved me, maybe because I am a mother and can't even imagine what Mary must have gone through. I struggle to hold back the tears every time I see it. 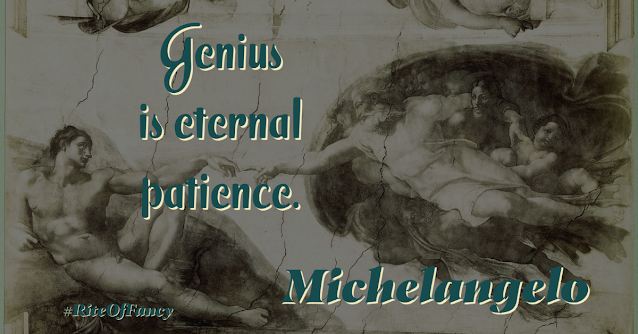 I've always wondered, given the breadth of his influence, why Michelangelo was never been made a saint, although I hadn't actively investigated the process until I visited Pawhuska's Immaculate Conception Church, and, when confronted with the tale of Father Bax and Father Schoenmakers, I wondered why they hadn't been made saints.  What exactly makes a saint?
And I don't mean the steps that one needs to follow to get to heaven, those are pretty straight forward and well documented.  But how does someone get the coveted "Saint" title?
First of all, not everyone who becomes a saint (aka goes to heaven) becomes canonized.  Canonization is where the person has been granted the "Saint" title.  This requires a papal decree.  There are, most assuredly, billions of people who are in heaven but haven't received the title.
Getting the papal decree isn't easy and begins at the diocese of the parish for which the person was buried.  The bishop of that parish needs to open up an inquiry into a person's virtues. The inquiry is the result of a petition.  After the bishop deems there are sufficient virtues, the person is recommended to the pope and gains the title "Venerable".  From there, the pope determines if the person is in heaven, at which time, the person gains the title "Blessed".  To become a "Saint", the person needs to perform two miracles. 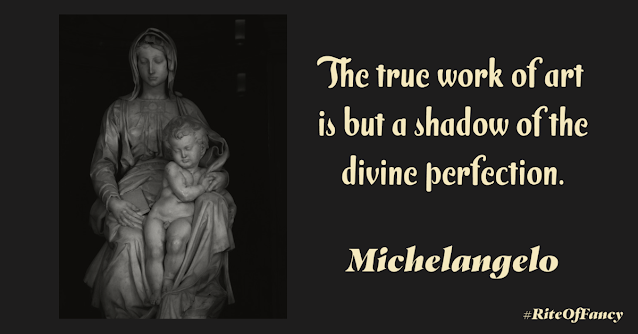 I poked around a bit, trying to figure out why Michelangelo was never considered for Sainthood and, no one knows.  Despite the amount of influence and inspiration his art has caused, it doesn't appear that there was ever a petition.  The reasons as to why vary from "It isn't necessary to bestow sainthood on artisans." (Why not?) to statements regarding his sexuality. (Yes, it appears that Michelangelo had homosexual leanings.  There is also a great deal of evidence that he lead a chaste life) to "Why does he need to be a Saint, he's already famous." I'm not sure there is a good answer to why a petition was never made.
What I did discover about canonization is that is it hard to get. You can be a really great person, go to heaven, and still not be canonized.  To get the Saint title, you have to do something incredibly noteworthy and, it looks like, you need to have a committee prepared to take up the cause of your sainthood, immediately upon your death.   You also need to make sure that all of the skeletons in your closet have been well documented and atoned for.   Skeletons will always fall out of closets and you can't deal with them after your death. In this day of social media postings that span decades, I'm not sure it's possible to live a blameless life anymore, the only thing I think you can do is show a "progression toward perfection."
Still, you have to do and/or say something major to get the bishop to open a case.  When I ponder the lives of St. Maximilian Kolbe or Saints Jean Donovan, Dorothy Kazel, Maura Clarke, and Ita Ford, that I am, to paraphrase, unsure if I could handle the rigors of canonized sainthood, and, while I may be able to die a quick martyr's death, I'm not sure I wouldn't break under torture. 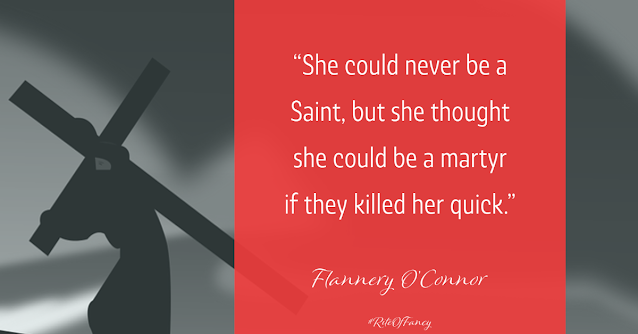 The path to canonization is a hard one and one I don't think I have the self-discipline for, nor do I think I could ever create such a committee and I think that I am ok with that.
It doesn't matter how many people know we crossed the finish line, it only matters that we crossed it, right?
xoxo a.d. elliott
Labels: Essays Non-Fiction Quotes Religious Spectacular Saints
Location: Tulsa, OK, USA