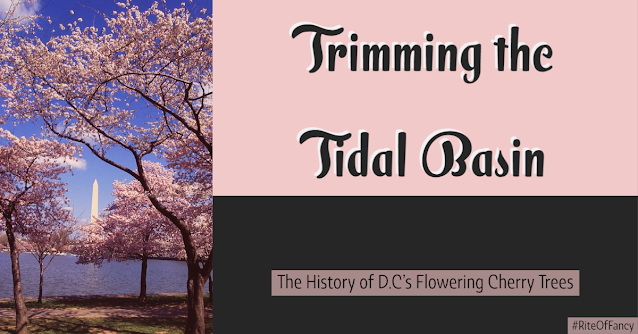 Dear Henry,
One of my "bucket list" trips is to check out Washington D.C.'s tidal basin during the Spring when the flowering cherry trees bloom.  The trees have become such an iconic part of monument photographs that it is hard to believe that the trees almost never came to be and were, several times, at risk of being destroyed.
D.C.'s tidal basin was created in the 1880s to keep silt out of the Washington Channel, prevent flooding, and to provide a recreation area for D.C. residents.  It was originally called Twining Lake after Major William Johnson Twining, although it is now called the National Mall Tidal Basin.  Initially, there wasn't much there, although the Washington Monument would appear in 1885 and the entire area was rather bland and treeless.
Fortunately, the author and traveler Eliza Ruhamah Scidmore knew exactly what was needed for the tidal basin.
Ms. Scidmore discovered and fell in love with the Japanese Flowering Cherry while traveling with her brother, the U.S. diplomat George Hawthorne Scidmore, in Japan and she was sure that the trees would be perfect for the area.
However.....
No one else agreed with her.  When she initially pitched the idea, the US Army Corps of Engineers (the early caretakers of the area) said no, flatly. Undeterred, she would continue to approach the Army every time a new commander came to post.  She would get nowhere with her idea until 1909 and the election of our 27th president, William Howard Taft.
Ms. Scidmore caught a lucky break with the election of President Taft, mostly because the newly installed Mrs. President, Helen Heron Taft, happened to be both a lover of the Japanese cherry tree and a friend of Ms. Eliza Scidmore.
On April 5, 1909, Ms. Scidmore discussed her vision with Mrs. President, who discussed the vision with Mr. President, and on April 7, 1909 plans were underway to plant Japanese Flowering Cherry trees in the tidal basin.
Another supporter of the project was the Japanese chemist (the discoverer of adrenaline) Jokichi Takamine.  He donated 2,000 trees as a symbol of intercountry relations, which arrived in 1910.  Unfortunately, those trees did not fare well during their trip from Japan, were infested with disease, and had to be destroyed. Undaunted, Mr. Takamine and Ms. Scidmore arranged for an additional 3,000 trees to be delivered, which arrived in the spring of 1912.  On March 27,1912, Mrs. President Helen Herron Taft and Mrs. Ambassador, the Viscountess Chinda of Japan, planted the first two cherry trees next to the northwest wall with Ms. Eliza Scidmore and press in attendance.  Those two trees still stand today.
The trees were a smashing success and the tidal basin became a popular (although segregated) place to gather.
However......
In the late 1930s plans were created for the Jefferson Monument, the construction of which threatened many of the trees, and with the erection of this monument,  President Franklin Delano Roosevelt found himself embroiled in a rebellion he didn't foresee. The trees were entirely too popular and society was not going to allow their destruction. Despite arrangements to relocate, rather than destroy the trees, the construction site of the Jefferson Monument remained unpopular (The monument itself was unpopular due to the economic strain of the Great Depression).  On November 18, 1938, when CCC workers started to clear the site, a group containing 150 of D.C. society's finest ladies, led by the journalist Eleanor "Cissy" Patterson, responded by chaining themselves to the trees. Rumor has it that these women were dressed in full luncheon regalia (including fur coats and pearls) and I imagine they were an incredibly daunting sight.  The Cherry Tree Rebellion lasted most of the day before a compromise was reached. The trees were relocated under the cover of darkness because everyone was afraid the rebellion would kick off again.
However.....
A mere three years later, the trees would, again, be at risk for destruction.  When Pearl Harbor was attacked on December 7, 1941, no one in American wanted a Japanese anything and the cherry trees faced their biggest threat to date - vandalization.  The trees were rebranded as "Oriental Flowering Cherry Trees" and had to be guarded during WWII.
After the war and when relations normalized, it was noticed that Japan's famed Arawaka River Cherry Tree Grove (the parent stock of D.C.'s grove) was suffering from the effects of the war and was declining.  In 1952 the U.S. sent trees back to Japan to try and heal that grove.  There have been exchanges between Japan and the U.S. since then, in an effort to maintain the groves in both countries.  There is even a D.C. cherry tree planted in front of the Yokohama Cemetery in Japan, the final resting place of Eliza Ruhamah Scidmore.
Now, of course, no one could imagine D.C. without the trees and the National Cherry Blossom Festival is considered to be one of the premier events in our capital and something I, one day, hope to see.
xoxo a.d.
Labels: Essays History Non-Fiction Things Gleaned From Reading
Location: Tulsa, OK, USA