The Tale of St. Bernard of Clairvaux 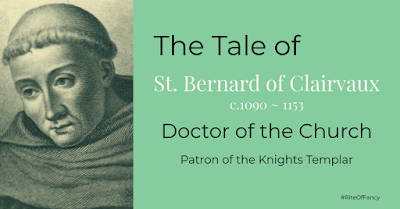 St. Bernard of Clairvaux who is known as the "Doctor of the Church" also happens to be the patron saint of my parish and now, with the pandemic, it seemed like a good time to look the good doctor up.

It turns out, he wasn't that kind of doctor.

St. Bernard of Clairvaux was born about 1090 to a noble family in Fontaine Les Dijon. He was educated very well and particularly excelled in literature and poetry.  He was also extraordinarily influenced by the faith of his mother and at the age of 19, shortly after her death, he applied for entrance to the Cisterian order. 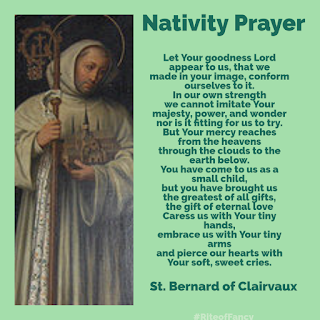 When he was 22 and in prayer, he felt God calling him to the Citeaux Abbey, and after sharing his testimony, compelled 30 of his friends and brothers to join him.  Three years later he would be assigned abbot of a new monastery being founded in an adjacent valley called Clairvaux.

St Bernard was often called upon for his counsel and for his skill as an arbitrator.  He attended the Council of Troyes and he would defend the rights of the church against kings. He also threw his support behind Pope Innocent against the anti-pope Anacletus and helped convince King Henry to support Pope Innocent as well, which gave Pope Innocent recognition by all the great kingdoms of the time, and a very strong case for the Chair of St. Peter.  It was through these actions as an arbitrator and a healer of schisms that gave him the title of "Doctor of the Church".

St. Bernard would also adhere to and defend church doctrine against the writings of Peter of Abelard, ultimately convincing him to withdraw his inaccurate writings of the Trinity and against the sects of the Petrobrusians and the Henricians. 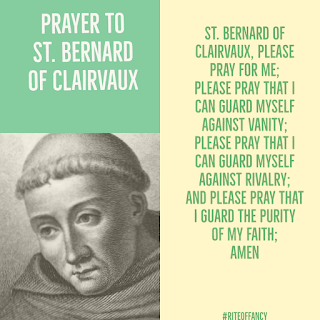 St. Bernard was also an instrumental figure for the Knights Templar, he outlined their rules of Chivalry and acted as their patron.

He is also the last guide through Empyrean in the Divine Comedy.

St Bernard was an advocate of Marian devotions and is the author of the "Memorae" and a believer in scared spaces and scared music, writing extensively about both.

He died on August 20, 1153,
and was initially laid to rest at Clairvaux Abbey but was moved to Troyes Cathedral during the French Revolution.

I hope that I can be that influential with my writings and that much of a peacemaker and arbiter.

The Nativity Prayer of St. Bernard of Clairvaux

Let Your goodness Lord appear to us, that we
made in your image, conform ourselves to it.
In our own strength, we cannot imitate Your majesty, power, and wonder
nor is it fitting for us to try.
But Your mercy reaches from the heavens through the clouds to the earth below.
You have come to us as a small child, but you have brought us the greatest of all gifts,
the gift of eternal love
Caress us with Your tiny hands, embrace us with Your tiny arms
and pierce our hearts with Your soft, sweet cries.

Prayer to St. Bernard of Clairvaux