Things Gleaned From Reading: Pop Goes the Chorus, Sounds From the Hagia Sophia 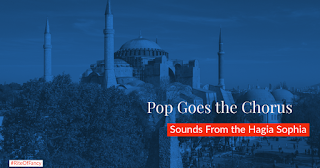 I just read the coolest thing about the Hagia Sophia.

For some background, the Hagia Sophia (Greek for Holy Wisdom) was built in 537 AD in Istanbul (Constantinople) during the reign of Justinian. It was an engineering marvel, with a central dome measuring more than 55 meters high and approximately 30 meters across and although the dome and the church have suffered several major and minor collapses over its history, the building is still very much within its original design and is considered one of the best examples of Byzantine architecture.

The building was a Christian (primarily Orthodox) cathedral from its opening on December 27, 537, until the fall of Constantinople to Ottoman forces on May 29, 1453.  The building was immediately looted and then dedicated to Islam and turned into a mosque, which it remained until 1935 when the building was converted into a museum.  Currently, there is a movement by Turkish Muslims, which has the support of Turkish President Recep Tayyip Erdoğan, to re-dedicate the building as a mosque but as the building has become a UNESCO World Heritage Site, it would require international approval for this to take place.

It's the acoustics of the dome that I want to tell you about.

The dome provides unique and remarkable acoustics and during the roughly 920 years that the building was a Christian cathedral, thousands and thousands of pieces of religious choral music were created specifically for the acoustics of that cathedral.

The problem is, no one knows, really, what they sounded like, because, from 1453 onward, the building has been silent. The Islamic faith prohibits singing in its mosques.

The balloons were the key to the project because the staccato of the pop perfectly captures the acoustics of a room.

Jonathan Abel used the recordings to create a program that adapts any music to the acoustics of the Hagia Sophia.

And now, the music of the Hagia Sophia has been reborn  - you can take a listen to some here: https://www.youtube.com/watch?v=bHpOiX2sO-s.