Ducks and Drakes - Its History and How to Play 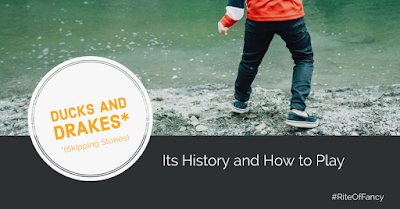 Have you ever played the game Ducks and Drakes?

Maybe you played the game under a different name, skipping stones.

The term "Ducks and Drakes" first appeared in English literature in 1583 and, given the description, the rules of the game haven't changed much.

The object then, as now, is to skip a stone across the water more times than anyone else.  I did notice one difference though. It was once permissible to use oyster shells, rather than stones.

Yes, there are rules to this game, because it is, in fact, an official sport.

During the summer months, professional players at Ducks and Drakes (or skippers, or gerplunkers) travel the country to different events, most being held in the upper-midwest,  with the Mackinaw Island's 51st Invitational being the US's crowning event.  The skip of the day in 2019 was 20 skips.

There is a bigger, worldwide competition held in Easdale Scotland, although this competition is much more challenging as the stones are bigger and must be 3 inches in diameter.

Another, interesting fact, is that almost every single country plays some form of this game. The Bengali call it "frog jumps" and the Nigerians "how a dragonfly skips across the water".