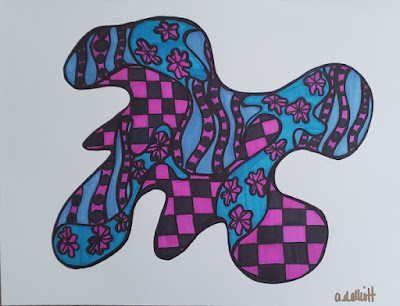 The 24 - hours has been a drama-filled adventure and I think it may take a couple of days for me to recover.

He pulled out the liner, spilling the nest out all over the porch.

Right away, Ziggy knew he was in BIG TROUBLE and, after Fish told me Ziggy was snuffing and nudging the baby that had spilled from the nest, I felt bad about scolding him (Ziggy got a double scolding, Fish had scolded him pretty good outside).

Fish put the nest back in the liner and the liner back into the basket back and then when waited. The parents showed up and they were quite upset (understandably).  They left and we didn't see them return.

We had done several internet searches since then and it was made clear that trying to hand feed and raise the birds ourselves was impossible, it never worked, was illegal, and we needed to call Wildlife Services.  It was also made pretty clear that Wildlife Services doesn't have the resources available to handle the abandoned babies of a common bird and wouldn't come to the aid of these birds.

We waited and hoped.  I don't know what we were hoping for.  We were quite sure that this situation was going to end badly.  The parents hadn't come back, weren't coming back and I was so very sad.

Then this morning, as I took Ziggy out for his potty (through the garage - the porch is now off limits for the dog until the bird situation is resolved) I heard the babies chirping and before I had a chance to get really sad (for I was sure we were now going to have to do something), I heard the parents answer them.

The parents had returned and were putting the nest back together, and collecting food for them, and unfortunately, they also removed another one of the babies, which had died (Fish said he had put three back into the nest, but he had said one wasn't moving around much).  I have been glued to the window ever since, watching the birds, making sure nothing happens, and so far, nothing has.

Additional lessons we have learned from this -

1. Despite everything you may have heard, birds (or at least wrens) don't abandon their young after being touched, even if they were touched by dog slobber.

2. Even if a dog has never, ever, ever before shown interest in a bird, doesn't mean that they will not suddenly start to find birds interesting, someday.

For the next week or so, the front porch is off limits and after the birds are gone I am going to make sure the baskets get filled with some annuals so that this never happens again.

I don't think my heart could stand it.