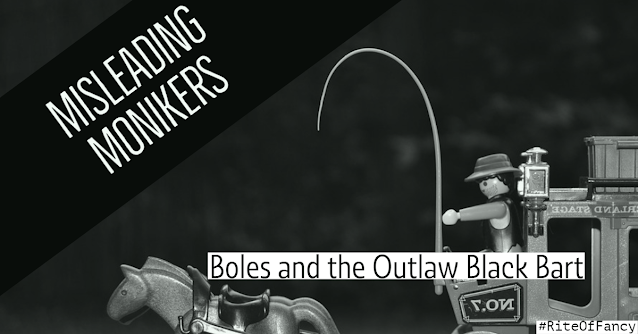 What is in a name?

If your name is Black Bart - a lot.

My knowledge of outlaws is quite limited and based upon the name Black Bart, I assumed (the mother of all mistakes) that he was an outlaw of a particularly bad and malevolent sort.  A Lone Ranger alter-ego, roaming the plains on a large, black horse, causing death, mayhem, and large insurance claims.

For one thing, he never rode a horse.

Black Bart was born Charles Earl Boles in England around 1829.  His family moved to the U.S. and begin farming in New York.  Charles and his brothers joined the gold rush in 1849 and the three had about as much luck as most other prospectors did.  Charles was the only one to live to return home.  He settled down and got married before enlisting with the 116th Illinois Regiment, taking part in the Battle of Vicksburg (where he was severely wounded) and Sherman's March to the Sea.

After the war, Charles tried his hand at prospecting again, this time Idaho and Montana and ominously, in his last letter to his wife spoke of a grudge against Wells Fargo.

While it is clear that he rode horseback during the war, he was known to be afraid of them later, so he always approached the stagecoaches on foot. He didn't wear a Lone Ranger style mask either, rather he employed a flour sack hood.  He also didn't kill anybody.

What Black Bart was known for was his poetry.  He would leave poems behind in the empty lockboxes.

There are differing reports on how many robberies he actually committed, but, on his final one, he was shot in the hand by the driver, and he had left behind several objects, including a handkerchief with the laundry's mark still attached.  He was tracked down from that.

He only served a few short years in prison for his crimes and on February 28, 1888, he left his boarding house never to be seen again.

Charles took the name Black Bart from a serial character in the Sacramento Union called "The Case of Summerfield".  The only similarity between the unruly character of fiction and Charles was the shared goal of robbing Wells Fargo Coaches.

It couldn't have been a more incongruous name.