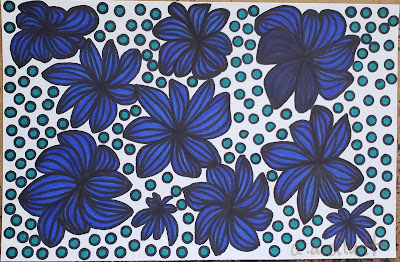 Do you talk to plants?  I do quite a bit, especially today.

Today was stage one of the new flower beds.  I had several plants, including a 20-year-old rose bush to move to their new home.

I talked very nicely to the hollyhocks and peonies and told them how much happier they would be in their new beds.

The rose bush's conversation was much sterner.  This old guy has grown to the size of three rose bushes and was completely wrapped around himself.  I was, in addition to moving him, also dividing him.

He wasn't having it.

After an hour of the two of us wrangling in the dirt and several puncture wounds that struck bone, I finally ended up threatening him. I told him his options - that he was to submit to the move and the division or he was heading to the trash because he couldn't stay where he was. (I think I may have called him an old bastard somewhere in this exchange.)

Oddly enough, that did the trick and I was able to get him untangled, divided and into the new beds.