The Brutal Beauty of the Humming Bird 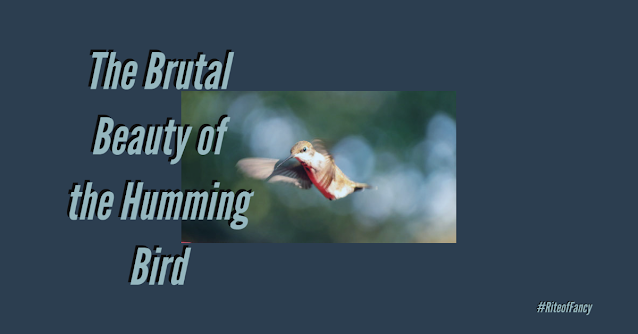 I would not have considered hummingbirds fierce animals until I saw a picture of their beaks in a New York Times article.

The article turned into an in-depth search about "all things hummingbirds" and I learned several things.

The Aztec deity war, sun, and human sacrifice, Huitzilopochtli, is depicted as a hummingbird. The image fits, once you realize the assertiveness of these little birds. These minikin creatures are quite chippy.

First of all, their previously mentioned beaks are barracuda-like. They are also territorial, with males fighting to control and maintain a territory. The girls just flit about, traveling from place to place, wherever they find an attractive fellow for the evening, apparently. Hummingbirds aren't very relationship-oriented. They are also carnivores. That surprised me actually, I thought they relied purely on sugar, via nectar, sap, or hummingbird feeder. (On a side note, I have personally had tremendous success attracting and feeding hummingbirds with strawberries - they suck out the juice of the strawberries, all of them). But, in addition to their sugar binges, they eat bugs, mostly aphids, and gnats.

I have seen them challenge the cats, who immediately ran and hid when one swooped at them and, to be honest, anything that sure of itself can be intimidating, no matter what it's size.  I would have definitely been afraid of losing an eye in that encounter.

Something to think about as I prep the hummingbird feeders this year.