What Would You Eat? Considering the Food of the Survival Shows 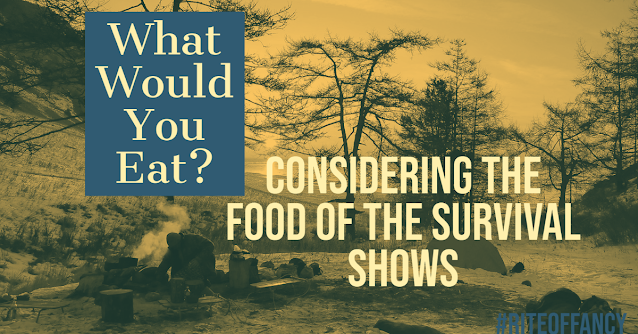 While I live in a TV-free house, we do have a streaming service subscription and occasionally I will find myself intrigued by a show.

Such was the case when Fish and I were sucked into a "survivor" show.

In this production, several pairs were dropped off on an island in British Columbia and left with ten items. The winners were the pair that survived the longest without tapping out (or dying).  The prize was $500,000.

While a couple of the teams left due to injury, most left because of hunger.  I remember thinking "If they couldn't find food, why weren't they eating bugs?" I thought this because I would be eating bugs, particularly in a situation offering $500,000 (I do acknowledge that I am saying this from a warm, dry house with plenty of food, so the "reality" of the situation may be different).

I bring this up because lately, there are a plethora of bug-eating articles and it made me wonder, would/could I develop a taste for crickets? I don't know, I rather doubt it.

But, when you think of all of the "plagues of locusts" that have caused wide-spread famines, I think it would be beneficial to cater to the possibility of a Locust Ragu, Weevil Fritters, or even a Summer Salad with Toasted Grubs to ensure no one starves.

I can't imagine this becoming a standard part of the American diet, but, in the spirit of an adventurer,  I will be trying the toasted grasshoppers if I ever make it to a Mariners game.

P.S. In the Orphan Master's Son there is a heartbreaking paragraph of North Korean prisoners eating the moths attracted by the floodlights to stay alive.  I have read that this is an accurate depiction.