Maybe It's The Lingo: The Leaden Language of Science Writing 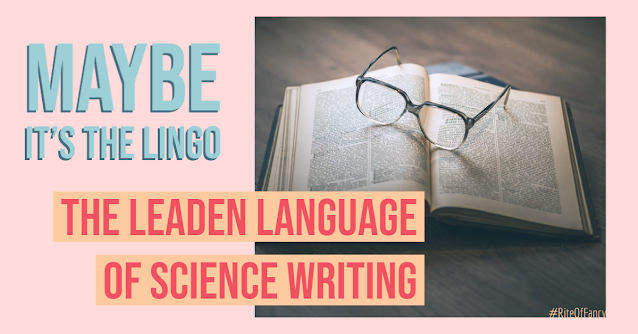 This morning, prior to finishing my first cup of coffee, I stumbled upon an article about science in the Washington Post.  It was quite brain-jarring.

This article, like many other scientific articles, was difficult to understand and I had to ponder that for a moment.

Why?  Why is it that scientific writing is so hard to read and understand?  Granted, the concepts themselves are challenging and esoteric, but, really, the same could be said for the bulk of what is considered  "great literature" and while there are some works that are hard to engage with ( "Moby Dick" and "Atlas Shrugged", I'm looking at you) most people have found some bit of literature they can enjoy.
I think the problem is the language. Science has its own language and those who are fluent in "science" aren't necessarily fluent in "descriptive English".    There are exceptions,  Andrew Thomas's series "Hidden in Plain Sight" was, I thought, a great "science for everyone" book and I was surprised that Stephen Hawking's "A Brief History of Time" was so readable.

While there are those that think scientific writing doesn't necessarily need to be readable to everyone, I disagree. I think our scientist need to be fluent in descriptive English (or their native descriptive language)   I believe that to truly know something means that you can explain it to anyone and as my hero, Joan Didion said in "Slouching Toward Bethlehem" - "The ability to think for oneself depends upon one's mastery of the language".  I would like to hope our great scientific minds can think for themselves.

I would like to hope all of us can think for ourselves.