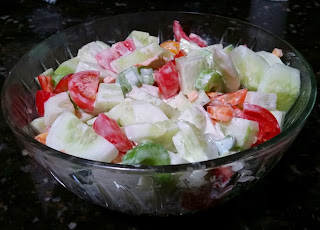 I made a major haul at the farmer's market this weekend, and then of course realized I bought a whole bunch of cucumbers.

Rather than just add them to tossed salad, I perused one of my favorite historic cookbooks - The Women's Institute Library of Cookery, published 1917- and found a recipe for a cucumber salad.

The original recipe says to cut 3 cucumbers in half, hollow them out and use them for serving (little cucumber boats).  I am neither that talented nor to I have enough patience.

The recipe also called for an unspecified amount of "salad dressing" and a pimento.   I didn't have a pimento, but I did have a gorgeous reddish purple bell pepper that I also picked up from the farmer's market.

For the salad dressing I used plain old ranch, adding 1 tbsp at a time until the salad was "dressed"

So here is my interpretation of the Cucumber Salad:


Labels: Recipes I Read About