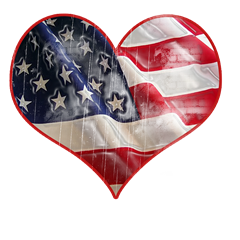 Tis the season for football, and during the opening of one of the games, I noticed that only about half the people in the stadium, including the players did not have their hands over their hearts.

This immediately spurred a “nuh-uh” bicker between my husband and I, as well as a corresponding Google search.

I had always thought that proper behavior around the flag was based upon customs and etiquette, I learned, however, that there is a U.S. Code dictating behavior in regards to both.

Title 4 of the U.S. Code tells you how to care for, handle, when to stand and how to carry the flag.  Title 38 will tell you how to behave during the National Anthem and just like I didn’t realize there are US Codes for patriotic observation, I also realized how little I knew about it.

I have also learned that it is improper to carry the flag horizontally – the flag should always be allowed to be “aloft and free”.

One trend that I had always thought was disrespectful, and now realize is truly against U.S. Code is to use the flag to make an article clothing, a window curtain, a bed spread, etc.
It was worth the few minutes to read through the American Observances and it made me sad that this wasn’t common knowledge to me.